What were those kayaks and canoes doing on the Susquehanna on October 27???

Posted by shickshinnyforward in Events, Partners, Recreation on October 28, 2012

We felt the quiet solitude of paddling a remote river in the backlands of Alaska, but we were right here in our own backyard becoming one with the Susquehanna River.

This past Saturday, Oct 27th, from 9am until 2pm, ShickshinnyForward was partner in sponsoring a Susquehanna River Kayak event and Susquehanna Warrior Trail walk, run & bike day. This event was free and promoted for adventurers to come out and enjoy the fall recreation and tourism options around the greater Shickshinny area. Dave Buck, owner of Endless Mountain Outfitters, provided kayaks for those who needed them and was an excellent guide, trainer and safety resource. We had a group of 16 kayaks, one canoe and a wire haired Hungarian bird dog on the adventure! Paddlers came from Shickshinny, Berwick, Mountaintop and as far away as Wyalusing and Sugar Run for this fall sojourn.

Nobody got wet and the temperature was a balmy 65… perfect for a fall paddle with a few novices along for the trip. The water was chilly and green topped with fallen leaves. We saw fifteen instances of bald eagles circling close by, swooping in to grab a duck out of the river for dinner (it escaped) and even paddling right up to find two eagles hidden perched in a tree just 20 yards away. To be clear, they were not crows; white heads and white tails flashed when they took off. They were joined by a few herons along the way. They were likely the same pairs of eagles; and they made their presence known. At the half way point we took a break for snacks. Throughout the day our paddling group, along with the many fishermen along the way were jockeying for position and comaradarie on the 7.5 miles of river trail.

Dale Freudenberger, Anthricite Region Coordinator of the Delaware, Lehigh and Wyoming Valley Herritage Corridor also came out to welcome the group to shore in Shickshinny. Recently in cooperation with the Susquehanna Greenways Shickshinny was designated as an official Rivertown and river trail.

We expect to do it again next year, but we’ll try to do it two weeks earlier to experience the peak in changing fall foliage. 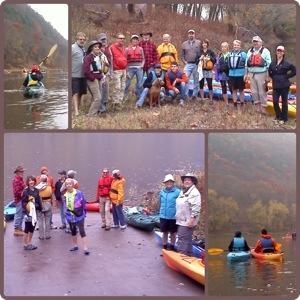 Posted by shickshinnyforward in Businesses on October 7, 2012

“it means so much to be able to provide a greatly needed resource.”

Tom Baseski is co-owner of Thomas’, in conjunction with his wife, Hayley Baseski, his sister, Pam Evans, and co-owner Chris Evans.  The four have owned and operated Thomas’ for the past 15 years, with the Shickshinny location being the 6th store in the family business.  Tom started in the industry working for Insalaco’s as a check-out clerk when he was 16 years old, and eventually grew to become a store manager.  Co-owner, Chris Evans, was a district manager for the same chain, which also employed both Hayley and Pam.  Tom enjoyed his time working for Insalaco’s, saying the company even provided education funding for employees.  While Thomas’ is still a small chain in comparison to Insalaco’s, he plans to build the same positive work environment as the company grows.

Owners Tom Basleski, Hayley Basleski, Pam Evans, and Chris Evans rest for a brief moment with a co-worker in Beertown on opening day

Thomas’ brings not only a much needed grocery to our small town, but also Beertown, which is will have “almost every type of beer” on the market.  Beertown will also have a café, which will offer fare such as cheesesteaks and meatball hoagies.   The store also touts robust meat and produce departments, and carries it’s own brand name food line, including some organic products, such as Foodtown Organic Eggs.

In the cooler weather, typically starting on December 10th and continuing through New Year’s Day, customers can partake in Thomas’ outdoor seafood market extravaganza.  Depending on the weather, the seafood market may also open for the the Superbowl season and Lent.  It’s been suggested to Tom that it might be tough for employees to work in 10 degree weather, but he says they really enjoy the change in pace.  “They bring hot Thermoses and bundle up for the cold,” making it a fun experience for all involved.

Thomas’ new store also brings 50 to 60 new jobs to Shickshinny, both full and part-time.  April Lopes is one of those new hires, and she says “it’s been non-stop all day.”  She started stocking the meat section at 6AM that morning, and at 6PM, was still going strong.  “The butcher has been hard at work all day, too,” she said.  April is a Shickshinny resident, herself, and is thrilled to finally have a grocery store back in town.  The trip to Fetch’s (grocery) in Plymouth was a drive for her, especially with gas prices going up.  She said that “the response from the community has been great.  Sometimes the store was so busy, it was hard to move.  There have even been people coming from Berwick to see the new store.”

Of course, one topic on the minds of many people is the issue of flooding.  Tom says he attended some Shickshinny Forward meetings “undercover,” because he didn’t want to get hopes up if things didn’t work out.  He admits he was at first skeptical about opening a store in a flood zone.  However, as he looked further, he found enough positives to outweigh his initial doubts.  He considered that some sources said 2011 was an unusual 200 year flood.  More importantly, the store location has flood gates installed, which would protect against most flooding issues.  The flood insurance turned out to be relatively inexpensive due to these extra protections in place.  The new owners put the electric in the ceiling instead of through the floors, and expensive equipment such as refrigeration is located on the roof.  Thomas’ is prepared with back up trailers and refrigerated units for storing food if necessary.  These products can then be moved to Thomas’ other locations, an option unavailable to the previous owners.  Lastly he says, Thomas’ employs over 400 employees throughout the business, some of whom could, if necessary, be mobilized to help.

Shickshinny is undoubtedly grateful for Thomas’ investment into the town.  The folks at Thomas’ can be assured that, in return, they can count on the support of the community.

Posted by shickshinnyforward in Projects on October 5, 2012

Event Flyer at this link

Join us for an afternoon of kayaking, biking and walking as we invite you and your family to help support Shickshinny.  With fall fast approaching, it’s a great way to enjoy our area’s natural beauty by enjoying the trail or paddling the Susquehanna River. Let’s create traffic on the trail!  Hope to see you there.

INFORMATION/ REGISTER: Please register if you plan to attend and let us know your plans for lunch. Call Brian 570-542-5330 or president@shickshinnyforward.com This is a *FREE family event unless you plan to stay for paid lunch — menu to be determined at nominal cost.

The ShickshinnyForward mission is to promote Business, Recreation and Tourism in our post flood Community.