Posted by shickshinnyforward in Businesses on June 11, 2012 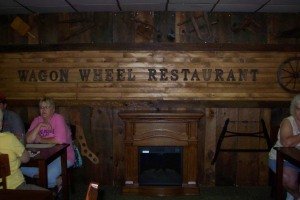 These are not always the words that make for a happy start to the day.  However, when that day is the Grand Re-Opening of the Wagon Wheel Restaurant at 5 E. Union Street, this is a sweet, sweet sentiment that has resulted from many months of hard work and sweat equity.

The destruction of this favored eatery was near complete and, as one viewed the extensive damage, it was almost impossible to imagine picking up the pieces and opening those doors ever again.  But, that was exactly the plan of owners Kim Miller and Arlene Monroe.  And they were very aware of the daunting task before them as Kim Miller herself stated,

“There were times we didn’t know how we were going to get it all done”.

On June 11th, somehow they did it…better than ever.  The floor plan remains cozy and homey with rich woods and whimsical decore.  However, the severity of the flood is not lost amongst the fun as there is an entire wall dedicated to photographs of the flooded town and the damaged restaurant, as well as documenting the re-construction.  These pictures certainly call to the determination of the owners to reopen despite the hard road ahead. 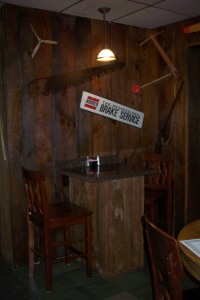 And the food…speaks for itself.  Great homecooking for breakfast, lunch, and dinner available to enjoy in the fresh, new dining area or to take-out.  Personally, the Honey Dipt Chicken alone was worth the wait.  During the day of the re-opening, one gentleman at the counter commented to another that he “hadn’t had the BLT in such a long time, the first thing I did today, was to get one here.  They are the best”.  Waitresses moved in a steady stream between the kitchen and the diners, bringing delicious food in one direction and then empty plates back only moments later.

The re-opening of The Wagon Wheel marks a paramount moment in the recovery of the Shickshinny area after the historic flood of September, 2011.  Now, get to The Wagon Wheel and celebrate with an excellent piece of pie.  The coffee is pretty darn good, too.

Posted by shickshinnyforward in Recreation on June 6, 2012 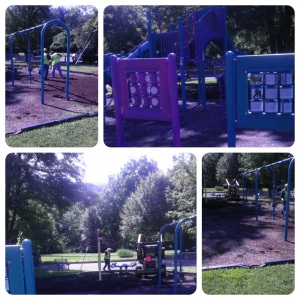 The Children’s park on Susquehanna Avenue (alongside the Susquehanna Warrior Trail) has been refreshed and is now open.  Come out and enjoy!  Thanks to the Shickshinny Borough, aided by their workforce.

Remember – no pets in the playground area, and all pets on the Susquehanna Warrior Trail, and in the Borough of Shickshinny, must be leashed at all times.